Dr. Hogan is a general dentist, accomplished implant dentist, life-long learner, teacher, father, and resident of Shore Drive/Virginia Beach. He has a passion for his patients and personalizes his work. He coined the term “We treat people, NOT teeth!” He felt so strongly about this philosophy that he won a copyright trademark on this and other similar phrases. People who have been to his practice recognize and appreciate the time he takes to care for them and get to know them by name, face and family. 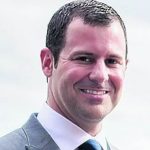 After his enlistment in the Marine Corps, Dr. Hogan began his professional studies at The University of Michigan, Ann Arbor. There he attended both undergraduate university followed by dental school. At the Michigan school of Dentistry, he served student council and the community while concurrently receiving clinical accolades and awards. He earned the Doctor of Dental Surgery Degree (DDS) in May 2003. From 2003 to 2006 Dr. Hogan again served in the armed forces as Navy dentist/ and flight deck officer. Lieutenant (Doctor) Hogan completed a hospital residency (GPR) at Portsmouth Naval Hospital in 2004. His experience was focused in oral surgery to include dental implantology. In 2005 and 2006, he was appointed the only dentist aboard the USS Ashland, LSD-48. There he provided quality and comprehensive dental care to sailors, Marines, and foreign military.

Dr. Hogan resigned military service in 2006 and partnered with Dr. Baxter, an internationally recognized icon in implant dentistry. Subsequently, Dr. Baxter was a phenomenal mentor to Dr. Hogan in general and implant dentistry. Adding to his professional implant education, Dr. Hogan completed a 1-year postgraduate program (MAXI course) in dental implantology sponsored by the American Academy of Implant Dentistry. In the subsequent years he studied and took examinations in Chicago, IL with the AAID and ABOI earning his Associate Fellow, Fellow and Diplomate implant credentials. As of 2013 less than 500 dentists worldwide hold this credential in implant dentistry. He performed well on examinations and would later be asked to lecture and teach dental implantology to other dentists. His lectures have been local, regional, national and even international. He had the honor of lecturing to dentists in Bologna, Italy in February 2013.

Dr. Hogan credits his happiness and success to his enlistment in the United States Marine Corps, good parents and mentors along the way. He enjoys the beach, boating, wake boarding, playing hockey, working out, and spending time with his wife, Allie, and three children. He lives in the Shore Drive area of Virginia Beach and proudly supports his local community through youth athletics, coaching and volunteerism.