After graduating from Howard University in 1983, Dr. Kelly accepted a position working with one of his former professors and also worked at the University as an Academic Reinforcement Instructor. Dr. Kelly realized that this was not the career path that he wished to follow so he moved back to Los Angeles, California to establish his practice. While waiting to pass the board examination Dr. Kelly worked at Southern California Edison Company as a Medical Analyst. This allowed Dr. Kelly to negotiate health care contracts and it also gave Dr. Kelly the opportunity to conduct health care seminars for the employees of the company. 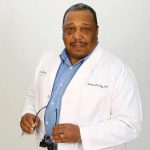 Shortly after becoming Board Certified, Dr. Kelly joined a group practice, which allowed him to gain invaluable experience in the various dental disciplines. Dr. Kelly eventually opened his own practice, which proved to be a great move, and eventually opened a second satellite practice in Playa Del Rey, California, which is one of Southern California’s more affluent neighborhoods. This practice immediately excelled and became the primary practice until he moved to North Carolina. The move to North Carolina was spawned by an offer that would allow him and his family to live in a more peaceful, and intimate environment. It also afforded him the opportunity to move into the type of Dentistry he had long envisioned, Oral Implantology, continuing Family & Cosmetic Dentistry. Due to Dr. Kelly’s love for the science of dentistry, this seemed the ultimate road to travel.