Dr. Dunson was born in Albany, Georgia, and is a third generation graduate of Morehouse College. After completing his undergraduate studies with a degree in biology in 1987, he entered the dental program at the University of Southern California (USC), where he received a Doctorate in Dental Surgery (DDS) in 1991. He then attended Columbia University’s general dentistry residency program at Harlem Hospital in New York. After completing the residency, Dr. Dunson returned to Georgia, and in 1992, he began practicing as an associate in Atlanta. At the same time, he served as a resident in the oral implantology residency program at Loma Linda University (LLU) in California, traveling to the West Coast one week out of each month for three years. The experience culminated in a graduate certificate from LLU in oral implantology in 1997. 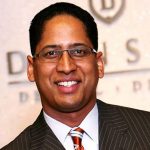 He also has an IV and oral conscious sedation certificate from Miami Valley Medical College in Dayton, Ohio, making him one of the select few restorative dentists in Georgia who are certified and licensed to do IV sedation. Dr. Dunson started his own practice as a general, restorative and cosmetic dentist in Stone Mountain, Georgia in 1996 which he later moved to Midtown Atlanta.  Dr. Dunson recently as returned to the location of his original practice to open a second location. Currently Dr. Dunson is operating and treating his patients both at Dunson Dental Design in Midtown Atlanta and Smile Source Atlanta East in Stone Mountain, GA.

Not only does Dr. Dunson serve patients local to the state of Georgia and states within driving distance including: Alabama, North Carolina and South Carolina, but Dr. Dunson is a destination dentist, providing services to patients who travel to Atlanta from around the country to be treated by Dr. Dunson.  Dr. Dunson’s multitude of 5-star reviews speak volumes to his talent both as a dentist as well as a relational doctor who truly cares and takes an interest in each person who walks through his door.

Dr. Dunson remains actively interested in the latest developments in his discipline. In October 2008, he was one of nine dentists nationwide awarded and honored as a Diplomate of the American Board of Oral Implantology/Implant Dentistry. In November 2009, he was one of eleven members to gain the distinction of Fellow in the American Academy of Implant Dentistry (AAID), the Fellowship status is the highest credential distinction bestowed by the AAID, the first professional dental implant organization. He continues to publish articles in dental journals and lecture.  Dr. Dunson currently holds the distinguished honor of being the Vice President of the AAID and will be the 2020 President of AAID.

Due to Dr. Dunson’s extensive training and expertise, he has started the Global Dental Implant Institute through which he administers the local Atlanta Academy for Restorative Dentistry and national DC MaxiCourse program. He, along with a Dr. Richard Borgner, teaches a hands-on learning Implant Surgical Series. Dentists have traveled from all over the United States to learn surgical techniques from Dr. Dunson.  Dr. Dunson is a sought after lecturer in the field of Restorative Implant Dentistry and has been on faculties for various continuing education and dental programs around the world as far reaching as India & Dubai.