Dr. David A. Goldberg graduated from Rutgers University, Cook College with high honors and a Bachelor of Science degree in Animal Science. He continued his studies at the University of Medicine and Dentistry of New Jersey (UMDNJ) where he earned his DMD (Doctor of Dental Medicine) degree, was inducted into the honorary dental fraternity, OKU and served as President of the Student Government Association. Dr. Goldberg completed his general practice residency at Montefiore Medical Center where he treated medically compromised patients and trained in anesthetics and emergency room medicine. 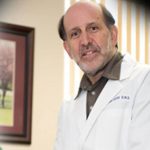 Dr. Goldberg completed his training in periodontics at the Columbia School of Dental and Oral Surgery where he taught undergraduate periodontics. He also served as an Associate Clinical Professor of Periodontics at Fairleigh Dickenson School of Dentistry for seven years. After opening his private practice in the Central Jersey area, Dr. Goldberg became active in the New Jersey Dental Association serving as State Chairman of the Membership Council, President of the Central Dental Society, and Editor of the Central Dental Bulletin.

Selected as a Fellow in the prestigious International College of Dentists, Dr. Goldberg has been singled out as one of the top periodontists in the state by NJ Monthly Magazine in 2002, 2005, 2010 and 2013. He has been published in refereed journals, served as Editor of the New Jersey Society of Periodontists Bulletin, and has been a guest lecturer at the NJ Dental School. Always looking for ways to help, Dr. Goldberg has volunteered to aid underserved populations both here in New Jersey and most recently abroad in Nicaragua.

Serving on the Board of Trustees of the New Jersey Society of Periodontology, Dr. Goldberg was also a past
President and newsletter Editor. He currently maintains his private practice in periodontics and implant dentistry, conveniently located at 176 Cedar Street in North Plainfield, NJ.

On a personal note, Dr. Goldberg is married to Cynthia K. Scott, PhD, has three children and two Labrador Retrievers. He and his family reside on their tree farm within the 2,500 acre Sourland Reservation in Neshanic, NJ. Dr. Goldberg is a sports enthusiast, participating in a variety of activities including running, cycling, basketball, tennis, and skiing. Even though he has never been invited to participate in any Olympic trials, he still enjoys his play and continues to revel in his work.