In 1986, Dr. Rousson graduated from The Lyon Dental School in France where he received his doctorate degree in dental surgery. After graduation, he practiced dentistry in Berlin, Germany as an officer in the French Army prior to moving to the United States. 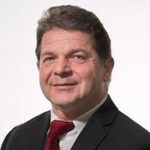 Upon arriving in the United States, Dr. Rousson attended Boston University Goldman School of Dental Medicine and graduated in 1990 with his doctorate degree in dental medicine. He continued to practice dentistry in various locations in the metro west area before establishing “Rousson Family Dentistry” in 1992.

In 1993, Dr. Rousson began focusing on dental implantology with the intent to broaden his practice to provide full dental rehabilitation. He has earned more than 500 continuing education credits in dentistry, which includes training in Switzerland at the Straumann Institute for Implantology and participation in “Maxicourse”, a yearlong advanced dental implant training course, designed by Dr. Norman Cranin, DDS, FAAID, FICD, FAAHD, FADM in New York City.

Dominique D. Rousson is a Diplomate of the American Board of Oral Implantology/Implant Dentistry (ABOI/ID) and in June 2011 was named “Fellow” of The American Academy of Implant Dentistry (AAID) as well as maintaining his membership for over 6 years. Dr. Rousson was elected by his peers and served as President of The Harvard Odontological Society for the 2009-2010 term. He is also a member of The Massachusetts Dental Society (MDS), The American Dental Association (ADA) as well as The International Team of Implantology (ITI). In 2006, Dr. Rousson was selected by The Consumers’ Research Council of America, and was a recipient of “America’s Top Dentists” Award in Implant and Cosmetic Dentistry for 2005-2006. In July of 2009, Dr. Rousson completed his requirements and was honored by receiving the very prestigious award of being named a “Fellow” in the Academy of General Dentistry (AGD) where he has been an active member since 1991.

Dr. Rousson has volunteered his time and knowledge, as well as, inspired many young people interested in the dental field. He has trained numerous dental assistants within his private practice who have moved on to obtain their own degrees in dental medicine as well as dental hygiene. He is currently serving as part-time faculty in the Advanced Graduate Education Program in Implantology at The Harvard School of Dental Medicine where he has been on staff since 1993.