Dr. Camm was born in Cleveland, Ohio, on July 27, 1950, and has spent his whole life there, attending Case Western Reserve University both for his undergraduate work, where he received a Bachelor of Arts and Science Degree in Biology, and for Dental School, graduating in 1976. He has been practicing in Brunswick, Ohio, since July 19, 1976. 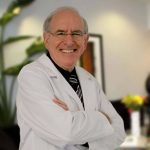 He is married to Donna Odian-Camm. Together, they have six children: two are Dr. Camm’s and four are Donna’s. Donna also has five grandchildren.

Dr. Daniel Camm is a member of the American Dental Association, the Ohio Dental Association, and the Medina County Dental Society. He is also a Diplomat of the American Board of Oral Implantology (www.aboi.org), a Fellow of the American Academy of Implant Dentistry, and a Fellow of the Midwest Implant Institute. He was President of the MII Fellowship from 1994-1998 and now serves as its Treasurer. In private practice, Dr. Camm has been doing dental implants since 1987. He has done over 2,000 implant and bone grafting surgeries with intravenous sedation. He is becoming renowned in a procedure called All-on-4 or Teeth in a Day which allows people with no teeth or some missing teeth to have fixed teeth immediately.

Dr. Dan Camm graduated from the two-year Externship Program of the Midwest Implant Institute in 1990 and has been associated with the Institute since that time. He has twice been the Program Chairman for the Implant Symposium that the Institute does every year. He also is an assistant clinical instructor with the Anatomy-Bone Grafting Course that the American Academy of Implant Dentistry does twice a year.

Dr. Camm was a clinical instructor at Case Western Reserve University Dental School from 1980 to 1986. He taught in the Crown and Bridge Department. He has also studied at the Dawson Institute in Florida. This Institute focuses on the way the teeth and muscles work in the head and neck to allow comfort or cause chronic pain, and how dental work affects the whole system.

Privately, Dr. Camm and his wife are passionate in their love for Christ. They attend Cornerstone Chapel in Medina and Bethel Church in Brunswick/Middleburg Heights. Dr. Camm and Donna have been traveling on mission trips since 1998. They have been to China 5 times, Thailand 4 times, Uganda (Africa) 3 times, Malawi (Africa), the Philippines, Naples (Italy), and India. They are involved in MERCI, Inc. begun by friends of theirs, Chris and Vicky Bowman. Chris and Vicky live in China and minister to bring Christ to the broken people there, in Thailand, and in the Philippines. Dr. Camm is the President of that organization, and Donna is the U.S. Treasurer. They are also affiliated with Christian Life Ministries in Uganda, Africa, and Delta Ministries in Portland, Oregon. Information about these organizations can be found online.