Dr. David Taler was born and raised in Baltimore, Maryland and recently moved to the Carmel area with his wife and two sons, Jackson and Hudson. He attended Franklin and Marshall College in Pennsylvania for his undergraduate education. There, he not only earned a Bachelor’s of Arts in Biology, but he also became a highly decorated varsity lacrosse player.  Dr. Taler earned membership into the Delphic Society, which recognizes scholar athletes who are members of the Dean’s List as well as varsity letter winners. 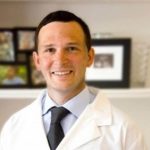 After graduation, Dr. Taler attended University of Maryland Dental School where he earned his Doctor of Dental Surgery degree.  After completing his dental requirements one year early, he was invited to attend the Advanced Education in General Dentistry Clerkship.   Here, he continued to expand his dental education in more specific fields such as implantology, oral surgery, endodontics and cosmetic dentistry.

Once he completed dental school, Dr. Taler attended a residency training program at the Baltimore Veteran’s Affairs Hospital.  He focused his training on implantology and prosthodontics.  Due to his leadership skills and extensive knowledge of dentistry, he was nominated as chief resident of his program.