Dr. John Moushati graduated from the William Paterson University in Wayne, New Jersey in 1982 with a Bachelor of Science Degree in Chemistry, and then spent two years in a Master’s program studying organic chemistry at University of Maryland, College Park. 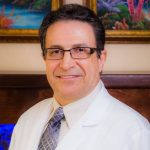 He enrolled at UMDNJ-New Jersey Dental School in 1987 ,and received his Doctor of Dental Medicine Degree in 1991. After graduation, Dr. Moushati completed a General Practice Residency program at St. Joseph’s Hospital and Medical Center in Paterson, New Jersey, which is affiliated with Seton Hall University.

“Hospital Dentistry was of interest to me,” says Dr. Moushati. “It taught me many skills of Oral Surgery that helped me later in the field of Implant Dentistry.”

In 1995, Dr. Moushati opened his private practice in Fort Lauderdale, Florida and in 1997 he pursued his interest in Implant Dentistry by completing a one-year Implant Dentistry Training Program sponsored by the University of Miami School of Medicine.

Ever since, he has taken many courses in both Prosthetic and Surgical Procedures sponsored by many institutions such as the Misch Implant Institute.

Dr. John Moushati has advanced post-doctorate credentials that set him apart from other practicing dentists in his field. He is one of only 400 dentists in the USA to hold a Diplomate Certification with the American Board of Oral Implantology / Implant Dentistry. He is also a Diplomate of the International Congress of Oral Implantology and a Master of the Academy of General Dentistry.

He currently practices General Dentistry with an emphasis on implant and cosmetics. Dr. Moushati has treated hundreds of cases in both surgical and restorative phases of dental implants and has extensive experience in cosmetic and implant dentistry.

Consult Dr. Moushati to learn more about dental implants and explore the best solutions for your lost teeth or denture problems.