Dr. Tsang attended the University of British Columbia where he studied mathematics before heading to Philadelphia to study at Temple University School of Dentistry, one of the oldest dental schools in North America. Upon graduating, Dr. Tsang returned to his home town of Abbotsford to open his dental practice . 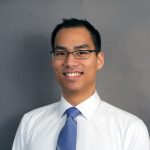 Dr. Tsang is Diplomate of the American Board of Oral Implantology/ Implant Dentistry (ABOI/ID), a designation shared by fewer than 50 dentists in all of Canada. Certification by the ABOI/ID attests to the fact that Dr. Tsang has demonstrated knowledge, ability, and proficiency in implant dentistry through a rigorous examination process. He is an Associate Fellow of the American Academy of Implant Dentistry and an active member of the Academy of General Dentistry, the Canadian Dental Association, and the British Columbia Dental Association.

He is an avid believer in continuing his education and over a hundred hours of extra courses each year on top of being an active member in several study clubs. In 2011 he graduated from the American Academy of Implant Dentistry MaxiCourse, one of the most well respected and comprehensive, international training programs in implant dentistry.

Using his training to give back to the community has always been of importance. Dr. Tsang has provided dental community outreach in Canada, the United States, and even as far as Haiti.