Dr. Wayne Simmons is a graduate of the University of Texas, Austin, Texas where he received his B.A. in Biology and Chemistry. He served four years active duty in the USAF and five additional years in the Active Reserves as an Avionics Officer and held the rank of permanent Captain. 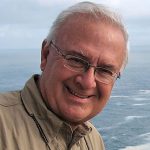 He attended and graduated from the Medical University of South Carolina, College of Dental Medicine, Charleston, South Carolina, where he received his DMD, Doctor of Medical Dentistry, Degree. He subsequently completed a two year residency in fixed removable prosthodontics and is a trained Prosthodontist.

He took a position as Asst. Professor of Crown and Bridge at the University of Texas Health Science Center, San Antonio, Texas.

Dr. Simmons became interested in dental implant treatment in the late seventies and became trained in the surgical and restorative phases of implant dentistry. Dr. Simmons was one of five of the first prosthodontists in the US to be trained in the Branemark Implant, Nobel Biocare today.

Dr. Simmons has belonged and continues to belong to numerous Implant Organizations here in the US as well as abroad. He has lectured extensively over the span of his career in the surgical and restorative aspects of dental implant treatment.

Dr. Simmons has current successfully treated implant patients in his practice from the early eighties.

Currently Dr. Simmons is also introducing a new dental implant which he invented and patented.

Dr. Simmons has maintained a private dental practice on the East Coast, for the past 20 years in Charleston, South Carolina.

Dr. Simmons’s career experience spans 38 years. In addition to a focus on dental implants he and Dr. Bryhn’s focus is equally posited toward aesthetic dentistry which involves crown and bridge (single crowns and fixed bridges) in a supreme effort to compliment the patient’s appearance and create an authentic, naturally beautiful smile.

Civic achievements: Dr. Simmons served as the President of the East Central School Board in San Antonio for eight years, during which time the Board was selected as the Outstanding School Board of Texas.