Dr. George was born and raised in Coventry, RI where he graduated from Coventry High School in 1992. 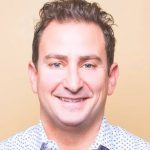 There are less than 500 Diplomates of the American Board of Implantology in the world. Currently, there are none in the State of RI other than Dr. George.

Dr. George received his Bachelor’s Degree at Boston College and went on to the
University of Florida for his Doctorate in Dental Medicine. He then went on to complete a military scholarship in Germany at Landstuhl Hospital and Wurzburg Hospital. In Germany, he completed a General Practice Residency at Landstuhl Hospital and received Army Commendations and Achievement medals for excellence in Endodontics and Oral Surgery. Dr. George was the highest producing dentist in Europe for 3 out of the 4 years that he served.

Dr. George has been named one of Rhode Island’s Top Dentists several times and has been featured on The Rhode Show and local NBC 10 news on multiple occasions. Dr. George has been featured in Glamour, Family Circle, and Better Homes and Gardens magazines. He has lectured both internationally and nationally and has published in international and national journals.

During his spare time, Dr. George enjoys traveling with his girlfriend Lindsay and enjoys spending countless hours with his dog Ida Red. He is a devout New England sports fan and loves to travel all over the world.