Dr. Ihab M. Hanna graduated, with honors, in 1994 from Cairo University. Afterwards, he spent three years in training and hospital residency before moving to San Francisco. He completed two years of General practice residency at the University of Illinois, as a chief resident, where he acquired additional training with the use of Dental Implants, sedation and special care dentistry. 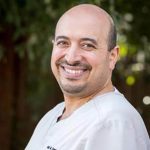 On the more personal side, Dr. Hanna is an active Coptic Orthodox Christian and contributes and helps his community. He is married to a magnificent woman who he had met in the Bay Area. Together they had a baby girl who was born in March of 2004, and twin boys born December of 2007.