Dr. Hopkins is a born and raised native of Shawnee, America. He attended Sequoyah Elementary, the old, old, Shawnee Jr. High that is now the Administration Building, Shawnee Mid-High, and graduated Shawnee High School in 1981. He received his undergraduate Bachelors Degree in Mathematics from the University of Oklahoma in 1985 and his Doctorate of Dental Surgery from the University of Oklahoma College of Dentistry in 1989. He became a member of the American Dental Association and the Oklahoma Dental Association that same year. He began practicing dentistry in his hometown as soon as the ink dried on the license. He is a second generation dentist and initiated his dental career as an associate in his father’s, Dr. Terry W. Hopkins, dental practice. This allowed a couple of invaluable years of the type of dental training and mentorship that no dental school can provide putting him light years ahead in not only his dental skills but also his understanding of how to manage a dental practice. He will be forever grateful for the experience. 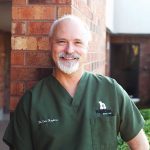 Dr. Hopkins is a general dentist who enjoys all aspects of his field. He sees pediatric through geriatric patients and the unique dental appeal of everything in between. He and his accomplished dental team can accomodate the full spectrum of dental treatment. In 1999, he attended the American Academy of Implant Dentistry’s maxicourse receiving advanced dental implant training at Brookdale Hospital in New York City, under the instruction of Dr. Norman Cranin, one of the pioneer of implant dentistry. He became a member of the AAID at that time. He has since completed well over 500 hours of implant continuing education. He received the prestigous acknowledgement of Associate Fellow status with the AAID in 2017, which is verification he is and accomplished implantologist and has proven such through an extensive evaluation process. He is also a member of the International College of Oral Implantology. He is an implant dentist, not just a dentist who does implants. He can perform the complete start to finish implant restoration, including bone grafts and sinus lift procedures, regardless of the comnplexity of your case.

Dr. Hopkins is notorious for his unique scrubs, many of our patients appreciate being serenaded by the “singing dentist”, and others enjoy his humor. While he purposely presents a lighthearted demeanor, he is serious about making your dental treatment as comfortable and stress free as possible.

Dr. Hopkins has been married to his high school sweetheart and Office Manager, Loree, since 1982. They have three children: Heather, Clint, & Bryan, plus bonus children of Heather’s husband, Corbin, and Clint’s wife Tasha. He is “Pop” to an ever expanding group of beautiful grandchildren. His second profession is as a PADI Course Director level scuba diving instructor. Scuba has taken him around the world in amazement of undersea adventure. He has become a fairly accomplished photographer on land and underwater. You might also recognize his as a member and deacon of First Baptist church, throught his performances at Shawnee Little Theatre and Sine Nomine, and various community and civic activities.