Dr. Jack Hahn is a well-known Pioneer in the field of Implant Dentistry. Hahn brings more than 39-years of Implant expertise to his patients, and his worldwide lectures. Dr. Hahn has placed over 40,000 Dental Implants. Dr. Hahn maintains his private practice in Cincinnati, OH. 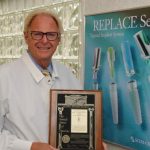 IN ADDITION, DR. HAHN HAS WRITTEN SEVERAL TEXTBOOKS AND 100’s OF ARTICLES ON THE SURGICAL PLACEMENT AND RESTORATIVE ASPECT OF DENTAL IMPLANTS.