Dr. Fennell grew up in Norwood Ohio, graduating from Norwood High School in 1972. After getting his undergraduate degree in Zoology from Miami University he attended and graduated from The Ohio State Dental School in 1979. He completed his residency at Womack Army Hospital, Ft. Bragg North Carolina the following year and then spent the next 3 years in Goeppeingen, Germany where he served as Officer in Charge of dental services for the soldiers and their families of the 1st Infantry Division. He earned the Expert Medical Field Badge and the Army Commendation Medal while in Germany. 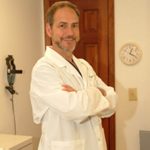 Dr. Fennell’s interest in the field of dental implantology began as a dental implant research assistant while a student at Ohio State. He began his formal training in implants with the Midwest Implant Institute in 1984,earning the Outstanding Extern Award in 1993. He has been actively placing and restoring implants for almost 20 years and has earned Diplomate status in the American Board of Oral Implantology. Dr. Fennell is certified to administer IV Sedation and maintains his certification in Advanced Cardiac Life Support (ACLS)