Dr. Martin L. Kolinski D.D.S. is a graduate of the University of Illinois College of Dentistry, where he also received his specialty certificate in Periodontics. 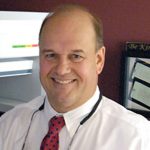 Dr. Kolinski is currently an adjunct professor in the department of Periodontics where he teaches post-graduate students. Dr. Kolinski is past president of University of Illinois College of Dentistry alumni association.

Dr. Kolinski began practicing periodontics in 1980 in Oakbrook, Illinois. In 1982, Dr. Kolinski started his private practice in St. Charles, Illinois with an emphasis in Dental Implantology. A couple of years later, Dr. Kolinski opened a second office in DeKalb, Illinois which he sold in 1997.

In 2002, Dr. Kolinski expanded and remodeled his St. Charles office site equipping it with the latest technology to support his dental implant and periodontal practice.

In 2012, Dr. Kolinski and Dr. Crosby redid and updated their office into a “state of the art facility” in both technology and decor.

Dr. Martin L. Kolinski lives in Wheaton, Illinois. Dr. Kolinski is married to his lovely wife, Cathie. He has three children, Tom, John and Nell, and two step children, Ashley and Michael. As the oldest of four children, Dr. Kolinski was raised in the Western Suburbs of Chicago, and attended Montini High School.