Dr. Huwais has completed his Periodontics and Implantology surgical training at the University of Illinois at Chicago in 1997. He has served as member of the Deans Faculty at the University Of Michigan School Of Dentistry, teaching in the Graduate Periodontics Clinic. Dr. Huwais is published in the Journal of Periodontology. He lectures nationally and internationally in periodontal and surgical implantology procedures. Dr. Huwais has developed, patent pending, a surgical instrument which helps in jaw bone expansion and densification. He and his staff have continued to keep abreast of the many advances in Periodontics and dental implants. Dr. Huwais holds Diplomate status in both the American Board of Periodontology, and the American Board of Oral Implantology. 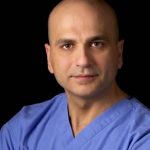 Dr. Huwais is married with two children. He is happily busy with their activities, enjoys traveling, playing tennis, swimming with his daughter, and building airplanes with his son. He is an active member of Jackson Parents for Educational Excellence.