Dr. Steve Johns has focused much of his dental practice on providing implants and reconstructive dentistry to his patients. “Implant dentistry is my passion. It has given me the ability to greatly improve the quality of our patients’ lives by allowing them to function as they did with their own teeth.” He has obtained credentialing in many implant organizations. 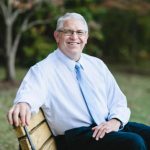 Dr. Steve Johns attended high school in Cookeville, Tennessee and received B.S. degrees in Biology from Tennessee Technological University. He graduated from the University of Tennessee College of Dentistry and returned to Cookeville to open a dental practice with his wife Dr. Mary Linda in 1981.

Dr. Johns is currently serving his 7th year on the AAID Admissions and Credentials Testing Board and is a Honored Fellow of the AAID (reserved for the top 1% of the Academy).

Drs. Steve and Mary Johns are both very active in the community. They attend and teach Sunday school at the First United Methodist Church. Dr. Steve Johns sings in the church choir and the Upper Cumberland Barbershop Quartet Chorus.

He is also a Board Member and Treasurer for the Cookeville History Museum.